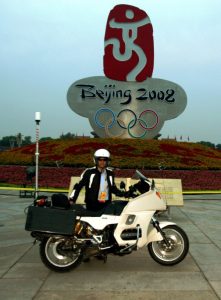 For the fourth consecutive time, after Sydney 2000, Athens 2004 and Beijing 2008 Gustavo Cuervo has been selected by Olympic Broadcasting Services (OBS) in charge of television retransmision the Olympic Games to be held in London in summer 2012. Gustavo integrated into a multinational team would be responsible for data cover shot of out-door competitions.
The cycling events, marathons, triathlons and racewalking require motorcycles to monitor the participants and the nearby imaging by the viewer at home part of the efforts of athletes. This time will be four motorcycles specially prepared for the live TV broadcast in which camera operators traveling with the aim of placing the viewers around the world in the center of the action. The triathlon will be covered entirely with Spanish teams while the other will be an international team of Dutch and English in collaboration with Gustavo, the head of the retransmission from the motorized units. Gustavo is consolidated and the only driver specialist who has covered more Olympics on a motorcycle in history