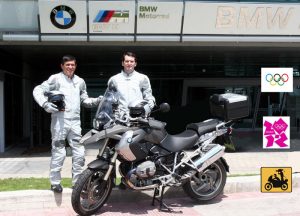 The Spanish team of riders that cover the out door competitions of the Olympic Games of London 2012 is already ready. To make their  work will have four motorcycles BMW K-1200 GT specifically equipped. For services and assistance used a BMW R-1200 GS. The specific conditions under which work needs to be develop do mandatory a comfortable and functional  apparel and nothing like the jacket and pants model BMW Air Flow to spend hours on the bike, sometimes very slowly (walking) and other fast (declines cycling road race). Boots and gloves of the same model Air Flow serve to maintain optimum body conditions to pilots in high temperature situations. The helmet Air Flow 2, the latest model of the German mark, with forced ventilation and equipped with headphones and microphones for communications-specific live TV, complete the costumes that look Spanish riders selected: Gustavo Cuervo, Miguel Angel Cuervo, Francisco Marin and Guillermo Perez. 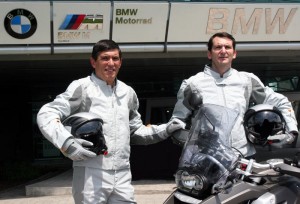 Motorcycles used to take up the worldwide television images of the marathon, race walking, cycling and triathlon are BMW K-1200 GT specifically equipped with the latest digital technology for transmission of high definition. BMW UK has also cesion a motorcycle BMW R-1200 GS for out door service team of Olympic television, which facilitates the rapid deployment and effective links between the different competition venues in the great city of London. BMW is the official sponsor of the London 2012 Olympic Games, bringing both cars and motorcycles necessary to transport and support services to both the organizer of the Olympic Committee and all national federations countries.