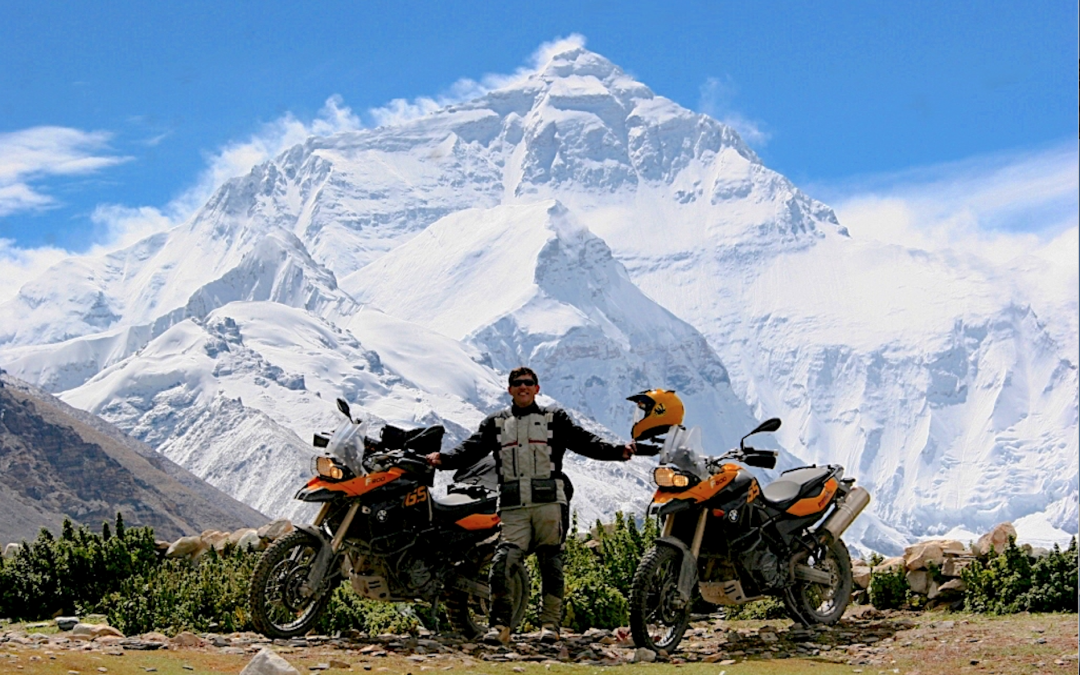 The wild corners of Tibet and China remain shrouded in mystery for much of the western world.

But a group of European BMW riders recently got the opportunity to explore the countries with the help of Spanish adventurer Gustavo Cuervo and his travel agency, www.chinalandofadventure.com. Gustavo led three GS riders on an epic 2,500 miles (4,000 km) trip, which followed the historic Chinese silk route, then across Tibet and finally reaching the Mt. Everest base camp.

The recording of the documentary was exciting, it was no problem having the crew on the trip,” says Gustavo. “We had the premier in Madrid on 18 November and it went very well, I didn’t think many people would come but there were hundreds of them. Not just friends, but journalists too. I think people are interested to see the remote parts of these countries, as these are places people often will not get a chance to see themselves. The spirit of the adventure is appealing to them.”

Gustavo explains the choice of bike was very important for the journey, as the machines needed to be able to handle rough gravel and dust tracks, river crossings and the thin mountain air. “The BMW F800GS was the only bike for us — the high altitude does not just affect people, it affects bikes too, the engines struggle more and are less efficient and powerful,” he says. “But even taking this into account the F800GS managed to handle everything, it was always reliable. It is also very light, which is important as you become very physically tired in the mountains.”

For one of the riders on the trip, fatigue and altitude sickness became too much and he was forced to head home after spending time in hospital. “It is one of the risks, it was very unfortunate for him, but he had to go back as he was very unwell,” explains Gustavo. “Every day you are riding at very high elevations, the average is around 4,000 m [13,000 ft.]. There comes a point of no return where, because you are so high, it is not safe for you to go back down quickly or you risk making yourself worse. You are riding for up to 10 hours a day and everyone is tired, including me. It is very important to be in good health, but even then you can still be affected by the altitude. Everest base camp is the highest we go and that is 5,300 m [17,000 ft].”

The travelers, who rode BMW F800GS motorcycles, battled exhausting altitudes, icy temperatures and language barriers during the journey. Gustavo says the incredible scenery, friendly people and fascinating culture made the tougher moments worthwhile. Asia is familiar terrain for Gustavo, who has visited China eight times in the past five months. This latest trip, however, was a little different as every moment was recorded by a professional film crew for a documentary.

Even for those unaffected by the mountains, the terrain was tough going. Gustavo and the rest of the riders faced dusty tracks, loose gravel paths, river crossings up to one meter deep and rickety wooden bridges. “Riders needed to have some experience at least, as there was a lot of quite difficult riding,” say Gustavo. “The most difficult tracks are totally off-road and there are areas where roads are under construction, so it’s really not easy.”

Despite testing times on the road, for most explorers involved the expedition proved unforgettable for all the right reasons. “I think my favorite part was the beautiful scenery, the intensity of the blue sky is amazing and you are surrounded by peaks more than 8,000 m [26,000 ft] high,” says Gustavo. “It was very interesting to meet the people living there too, there are many yak shepherds and nomads. We also saw a lot of pilgrims heading for Kailash Mountain, which is so sacred nobody is allowed to climb it. There, they spend three days walking all the way around the base of the mountain — a pilgrimage known as the Kora.”

Gustavo says the people they met were friendly and helpful despite verbal communication being almost impossible. “We would communicate by smiling as although I know a small amount of Chinese, the Tibetans speak their own language,” he says. “People were obviously surprised to see westerners out there and they would be interested in us and the bikes. We did face some small difficulties as there are areas which are controlled by the military. The more experienced ones were fine, but some needed to be bribed with cigarettes.”

For now, Gustavo is taking some well earned time off and plans to rest before beginning his next trip in April 2011. “The journey was exhausting, so I am not sure how I feel yet about my next journey,” he says. “In April we will go to the southeast of China. It is an area with lots of very small villages — I think it will be strange for the people there to see westerners riding motorcycles.”